Politicizing the QR Code: How to Make it Work For Your Campaign 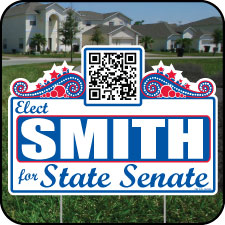 Political campaigns are often behind the times, and not just when it comes to what policy to support, but also with regards to technology.  It was really only the past couple elections where the internet really began to be used to its full potential.  But those candidates that decided to adapt to the changing world and use these new technologies, benefited greatly.  Whether it is Howard Dean, Barack Obama or Ron Paul, all of these three used some new under appreciated technology to benefit their campaign, and were ahead of the pack.  Unfortunately change isn’t always a comfortable word in political circles.

The Benefits of QR Codes in Political Campaigning

One piece of technology that could be incredibly useful for the political campaign industry, if they decided to get with the times, would be QR codes.   The ways that they could benefit are almost unlimited, and a creative mind could put together some terrific QR code campaigns that would be sure to garner interest, increase donations, or simply help spread the word.

Political campaigns are really just large scale advertisements and marketing campaigns, or at least that’s what they have turned into over the past 50 years or so.  Because of this a QR code fits right in with what any campaign is trying to do.  There are many ways to use QR codes in a campaign, but here are a few examples to start you thinking in the right way:

Every political campaign has marketing brochures or letters they send out to prospective voters.  There is no reason to not have a QR code on these brochures/letters.  The options of what to link the voter to is unlimited but some good ideas might be to link to a video of a speech or news coverage of the candidate; or perhaps a schedule of all upcoming events; or maybe send the voter straight to a donation page to make financial contributions as easy as possible.  Just make sure there is a call to action next to the code.

Yards signs could all be printed with QR codes that link directly to a candidate’s web site, or info page, or any general background story on the candidate or policy.

Tabling events at colleges, or sporting game, or any other similar events might have a QR code that when scanned takes the person to a donation page so they can donate right at the point of contact, the most likely moment someone would choose to donate to the campaign.

Really these uses are unlimited, and these are just some of the low hanging fruit, a campaign should look to get creative with their QR code use in addition to making sure these basic uses are put into action.

Adopting this technology is a great, inexpensive way for political campaigns to increase their marketing productivity, increase donations, distribute information and appeal to a younger crowd.  There really is no reason to not be using this technology, no matter the size or scope of your campaign.

…Oh and just please make sure your political campaign doesn’t use QR Codes like this.