I wrote a blog a little while back about how QR codes can induce progress, and I found the idea incredibly interesting and exciting. So I thought I would expand on this idea, and explain in greater detail how QR codes (or similar tools like NFC technology) could lead to wealth creation and improve the lives of millions of people in many other ways.

Wealth can be created by freeing up resources, whether those resources are human labor, commodities, or time.  These resources are freed up through increased efficiency (allowing greater saving), whether through new capital equipment, a new technology, or a new technique of doing something.  With the increased efficiencies, prices will over time decline, freeing up resources to be saved or spent in other areas of the economy, often times being used to discover new technologies or new techniques continuing the process of wealth creation (assuming no restrictions, regulations or other burdens that prevent this process from occurring).

We can see an example of this when we look at the invention and subsequent uses of an important technology such as the wheel.  With the creation of the wheel, some individual somewhere had to decide to spend time making this invention as opposed to foraging for food or some other important activity.  He took a risk and forfeited current income for future benefit; his risk paid off, for himself and the rest of humanity, and a huge wealth explosion subsequently took place.

When the wheel was created and people began to see its practical uses, this drastically increased the efficiency of human beings as well as their animal capital.  Instead of only being able to transport what you or your animal could carry on their backs, much larger quantities of goods could be transported in carts and carriages.  Human capital was freed up and fewer people were needed to do the transporting, now one man could pull a cart and carry a much larger quantity of goods, allowing some number of people to divert their energies to other wealth producing activities, such as inventing new technologies, improving shelters, foraging or any number of other possibilities.  The efficiencies of human labor were greatly enhanced with the creation of this new capital good and the wealth that was created from this and has been compounded on top of this technology is too large to comprehend.

This sort of wealth creation does not occur only with such monumentally important inventions.  Instead most wealth creation occurs from very minor advances or efficiencies, and here is where QR codes and NFC technology enter the picture.  Such technology, while very exciting, is not some revolutionary invention like the wheel, TV, radio, or the internet, but it has a similar wealth producing effects if used correctly.  And it is these potential uses, or at least a couple examples of them, that I would like to discuss here, and point out how they would enhance the wealth and lives of humanity.

Let’s pretend that numerous retailers, particularly super markets, clothing stores and other large retailers adopted QR codes or NFC technology in a way similar to Tesco, or Hointer.  That is, let us say that they fully utilized this technology to create virtual store fronts, where large inventory of food, clothes, or other products are replaced by photos, or single units of products which are then scanned and entered into a virtual shopping cart, to either be picked up at the end of your shopping experience or shipped to your home or office. 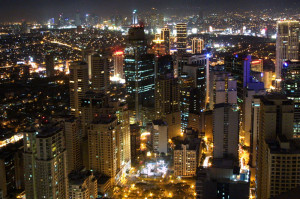 The results of such a technology on wealth creation and other benefits would be quite impressive.  For the retailer the benefits are many.  First, the need to always have shelves stocked reduces the need for labor, though some would be diverted to the warehouse to fulfill orders.  Labor for checkout would become unnecessary as all payment would be done electronically over the smart phone, again reducing labor costs.  This reduction in overhead for the company would help increase profits, and allow for more investment and growth for the company, while also reducing the price of goods sold, freeing up consumer resources to be spent in other areas of the economy, saved, or invested, and thus stimulating those other sectors of the economy and increasing overall wealth in the society.

In addition to this reduction in labor overhead, the necessary space required for a super market, clothing store or other large retail establishment becomes drastically reduced.  This has numerous benefits.  The first direct benefit is an expansion in rentable space for other store owners, freeing up commercial real-estate and possibly making room for additional residential property as well.  This increase in supply of space and decrease in demand helps to reduce outlays for rent, freeing up resources, reducing costs and driving down rents, thus driving down overhead for all property, and freeing up more resources to be spent elsewhere, saved or invested.

A secondary benefit would be less land space needed for retail buildings, meaning less deforestation or development.  For example a Wal-Mart might only need half the space they currently use or less, meaning a 50% decrease in wild land being developed.  A benefit environmentalists should certainly love.

For direct benefits to the consumer, we would find decreased consumer prices and thus an increase in resources available for other goods and services, as well as for savings and investment, leading to the generation of new wealth and an improvement of all members of society.

The consumer would also see other benefits such as less time expended on shopping due to a more efficient shopping experience, reducing crowds, time walking aisles, no need for physical checkouts and thus lines.  This additional time can then be spent on higher productivity, learning, or simply leisure.  Improving the lives of everyone.

These new resources freed up from that adoption of this technology would then find their way into other industries, creating expansions in output across the economy.  Savings and investment could then be increased to allow for future growth through a larger capital base.  And this influx in capital would drive productivity higher, increase wages, increase supply of goods and decrease costs even more.  Future inventions could then be allowed to come into being through this additional savings and investment, and the process would continue to compound.

It is quite amazing how a simple technology like the QR code or NFC, could have such a significant impact on the betterment of humanity.   Now all we need for this to occur is for people to see the uses of such a technology and begin to adopt it en masse as opposed to just the trickle we currently see.  Sometimes technologies take a while to catch on, but eventually all the good ones do as long as there are no unnatural impediments standing in their way; I’m looking at you Washington D.C.