Example of a Great QR Code 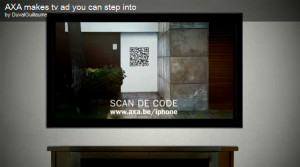 I find creative examples of QR code use all the time, though some are more creative or more productive than others, this is an example of one of the more creative and more interesting uses I have seen.

AXA, an insurance company in the Netherlands, has been out in front of most companies when it comes to using new technologies, and it was no different when it came to using QR codes.  The funny part about AXA’s initial QR code campaign is that they used it in a way generally frowned upon: they put it in a TV commercial.

What makes AXA’s use so creative is that they made the QR code the focus of the entire commercial.  This focus and the length of time the QR code remains on the screen, all with a great call to action and interesting setting, ensured the success of this generally frowned upon media for QR code use.

The TV ad begins with a home with no door; instead a QR code takes its place.  As the camera begins slowly moving towards the code the screen shakes and you see that something has impacted with the house.  The viewer is then prompted to scan the code to go inside and find out what the impact was.  The commercial leaves the QR code on screen for the remaining commercial segment, leaving plenty of time to scan.

What is so great about this ad is that the viewer is given an interesting story that plays to the curiosity of human nature.  This story ensures that they advertisement will draw in the viewers attention and almost certainly get them to scan the code, which is sitting there on screen for almost 30 seconds waiting to be scanned.  Once the viewer scans the code they are able to discover the mystery and are prompted to learn more about the company.  It is this interaction with the brand and fun mystery that helps drive interest, name recognition and ensures AXA will always be considered as an option for home insurance since they will likely never be forgotten after such an interactive experience.

If you want to know how to make QR codes work and work well, start using them like AXA and you will be off to a great start.