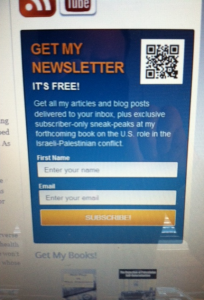 I was reading one of my favorite political blogs the other day on my laptop and one of the advertisements on the side of the website was an advert to sign up for the author’s (Jeremy Hammond) Newsletter, and receive information on his upcoming book about the role of the U.S. in the Israeli-Palestinian conflict.  On this advertisement was a QR code, and it honestly made me scratch my head.  Why would you use a QR code on a desktop website’s advertisement? (This shouldn’t take away from his brilliant political/economic commentary.)

Looking at this particular QR code use, it really doesn’t make any sense at all.  When you scan the code (not sure why anyone would since there is no call to action) you are taken to a sign-up page.  This would be good and all except for the fact that the advertisement itself allows you to type in your information to sign up.  So why would you bother scanning the code to sign up when you can just do so without the hassle of pulling out your phone, opening the scanner app, and then signing up on your phone?

If someone is already on their desktop computer reading your advertisement then they are very unlikely to scan your code, particularly if your code has no call to action and if the landing page for the QR code is the same content. 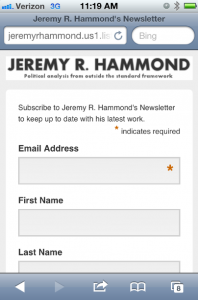 There is however an exception to this generally agreed upon rule of no QR codes on desktop ads/emails/desktop websites etc.  If you are advertising something like a mobile app, you might include a QR code in the desktop ad and with a call to action tell the potential consumer to scan the code to download the app.  This would be a smart and useful application of a QR code.  Such an example would make sense unlike the one above.

As long as the purpose of the QR code on a desktop advert is associated with something mobile (perhaps in the case of the blog mentioned above it took you to a place that let you subscribe to a mobile version of the newsletter) then a QR code might make a lot of sense.  On the other hand if it provides no new content and is not mobile related then there is absolutely no reason to include a QR code and in reality all you are doing is contributing to the general disdain or lack of interest some people have for such technologies.

Of course if you are going to use QR codes be sure to use a QR Code management platform that will solve every one of your needs.