Putting QR Codes on Desktop Websites: A Bad Idea or a Terrible idea?

So I have written before about using QR codes in TV commercials and other media, but I don’t believe I have ever discussed using QR codes on desktop websites, or other online uses.  The main reason for this lack of discussion is that I have never been lucky enough to see such a terrible use of a QR code myself.

Maybe I am jumping the gun though in calling it a terrible use.  To be honest I haven’t given it a ton of thought.  But now is a perfect time to dwell on the issue and determine if it’s only a bad use or if it really is a terrible use of a QR code.

So I was on Yahoo!sports.com and saw an article about getting chiseled abs and couldn’t resist finding out about the one easy move I needed to melt away all my fat from my gut.  I clicked the link to the article and the resulting screen that was staring back at me was baffling and prevented me from ever making it to my main purpose for visiting the site: to become a chick magnet.

The problem was the confusing QR code that sat in the top corner of the webpage.  I glared at it for a good minute wondering what I was seeing.  Finally I realized that it indeed was a QR code, and someone somewhere decided it would be a good idea to place the code on a desktop ad.

Without a call to action I could only dream where I might be taken upon scanning.  But after regaining my composure I proceeded to scan the code.  What was revealed to me was this… 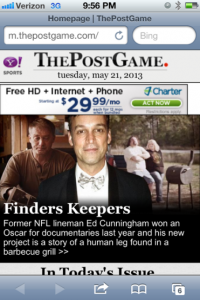 A Yahoo!Sports.com blog called The Post Game.  The blog was optimized for mobile phones, indicating that indeed someone somewhere really put some thought into this QR code campaign, and expected it to actually be used. 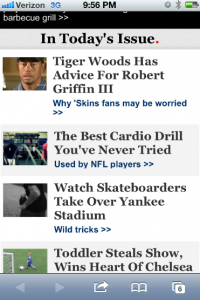 The question that needs to be asked at this point is why not just link to the desktop blog since clearly I am already using my desktop computer?  Now of course you probably could have clicked on the headline and would have been taken to that exact blog, but why add the QR code?

The only possible answer I can come to is “Why not?”  And surprisingly I may actually find some merit in such a response.

At first I found this QR code use simply ridiculous and quite useless, but after giving it a bit more thought I wasn’t so sure.

If you have a large banner ad like this one, and you have some empty space, throwing a QR code on there may not be a bad idea (a call to action or a description as to what it is would certainly help though).

Here is a hypothetical as to where it could be useful:  Suppose you are quickly browsing Yahoo!Sports.com on your desktop to consume your opiate for the day but you need to get going.  There is some incredibly important article about Lebron’s ego having its own Birthday celebration that you are unable to get to and wish you could read it later in the day.  You all of a sudden see a QR code telling you to “Take our blog with you!  Scan the code!”  You scan the code and now you have access to Lebron’s ego right there on your phone, ready to be read at a later time!

So we see that such a use of QR codes isn’t entirely useless.  In fact, after even more thought, I can see QR codes on desktop sites being VERY useful.  Say you are a company that wants to advertise your new mobile app, why not place a QR code on your desktop website telling people to scan the code to be directed to your new mobile app!  BAM!  More App downloads!  Really it is quite genius.  I don’t know how I hadn’t thought of it before.