TV and QR Codes: A Case Study in Faith and Human Failure

So there I was, watching a Boston Red Sox game on a lovely spring evening, thinking to myself “I wonder who the Red Sox play next series?”  Sure I could have opened up my lap top and searched online, but really who has time for that?  Instead my mind drifted to some other thought, likely as useless as the one before it.

So there I am staring away at the twenty-first century opiate of the masses when something unexpected occurred, something you could probably never imagine, something you would likely find simply preposterous.  As if my previous wish had been heard on high by YHWH, there appearing on my television screen, a bright glowing QR Code shown, granting me my wish and presenting me with the ability to know the truth of my question. 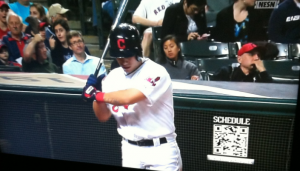 So there I was stunned at the miracle that presented itself to me, and amazed that someone up above truly cared.  When I finally pulled myself together I grabbed my phone, caring more for my readers than my own hopes and dreams, I opened up the camera and took the screen shot which you see here.

What a genius use of a QR code by the NESN broadcasters I said to myself, and a brand new world opened in front of my eyes, completely destroying my previous view that QR codes and TV generally do not go together.  This one use, made specifically for me and designed to answer the question I was just dwelling on moments prior was all the proof I needed to re-shape all my misguided preconceptions.

I took my photo, opened my QR code reader and as I lifted my phone to scan the code POOF!  Just like that, it was gone.  “NOO!!  WHAT IDIOT PUTS A CODE ON SCREEN FOR TEN SECONDS!!!!  CURSES!!!” (though I didn’t say “curses”)  This whole time I was being tricked not by YHWH but his antonym.  Teasing me, testing my faith in codes.  But no worries I thought, they will surely show the code again, and I will be ready to find my truth.

Seconds turned to minutes as I sat there like a little kid in anticipation, but the code never re-appeared.   My hope turned to sorrow as I slowly moped back into my chair.  Reserved to the horrible fact that I would have to suffer through the next twenty-four hours in ignorance before I could finally learn the truth that I had been seeking, I ragged deep inside my soul, and all because the damn NESN graphics department couldn’t seem to figure out that if you are going to use a QR code on TV you had best give the viewer time to scan the damn code.