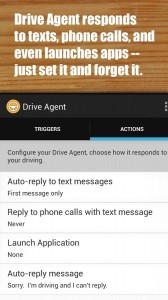 All of us, to some degree or another, are likely guilty of the modern sin of texting or talking on your phone while driving.  And of course many states have made these things illegal, or if not, the societal pressure to stop distracting yourself while you drive a two ton metal machine at high rates of speed is likely so great that you may feel guilty when caught engaging in this sort of behavior (I know I do on a daily, or even hourly basis).  Though I often engage in this potentially dangerous activity for some reason I can’t seem to stop it outright.  Fortunately there is now a way to help people like myself stop texting and talking while they drive, and it is only possible in part because of NFC.

A company called TagStand—a big name in NFC—has recently developed an app that encourages users to focus on driving rather than taking a call or responding to a text.  The app itself, called Drive Agent, sends a text message in response to either a call or text back to the individual trying to get in touch with you, telling them that you are currently driving and will get back to them when you are less distracted.

This alone is incredibly useful, but a problem with similar apps is in the long wait time to turn such an app on.  This wait time prevents people from using the app as often as they might, or prevents them from using it altogether.  So what TagStand has done is create an NFC tag which can be placed on your car phone holder and once your phone is set in the case the NFC tag activates the Drive Agent app and all calls and texts will be responded to with an automated response.   This ease of use will go a long way to helping in the adoption of such an app, and hopefully decrease the likelihood of an accident by users.  So really this app will probably save thousands of lives.  The creators probably deserve a medal or something.

There really are an incredible number of creative uses for NFC technology like this one, and is not limited to payment uses only as many still seem to believe.  For the millions of Qfuse blog readers out there interested in NFC technology I will be sure to write about these many creative uses as I discover them, so be sure to check back in frequently.