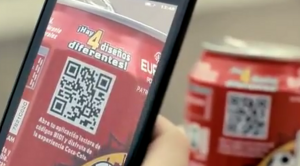 Product packaging is a perfectly natural medium for QR code use and more and more companies have begun to utilize this new marketing and advertising tool.  Of course, as with most new technologies, some companies are better at using them then others, and QR codes are no exception.  Most attempts at QR codes use that I have analyzed, in fact, have been pretty poor or simply an incomplete use of the tool.

On occasion however, you find some truly fantastic uses, or at least examples where the QR code campaign was done in perfect alignment with general best practices.  One example of this is from the beverage giant Coca-Cola, who last year introduced QR codes onto many of their Coca-Cola cans in Spain.

For Coca-Cola to have entered the QR code world means that the technology is beginning to find its place in the market and finally take off.  Though still a year later only a fraction of all beverage product packaging contains a QR code.  It is my guess however, that with Coca-Cola’s success many more will begin to utilize this marketing and advertising tool as well.

In the particular case of Coca-Cola, what they did was place a QR code on many of their cans and have them direct consumers upon scanning to relevant content.  For example during the Euro Cup the code would direct consumers to Euro Soccer 2012 videos.  Other relevant content consumers would be directed to were social media sites, various consumer competitions, and different relevant promotions.

This campaign helped Coca-Cola connect with their customers, learn what interests them, how to market to them in the future, and all the while providing additional value and engagement with the consumer.

The company that helped orchestrate Coca-Cola’s campaign, ScanLife, indicates that as of first quarter 2012, they had seen a 200% increase on scans from the previous year with the most successful content being videos, app downloads and product details, in that order.

This growth looks to only continue as more companies jump on the bandwagon that companies like Coca-Cola got started, and if they use the QR code tool correctly they can expect to see great rewards.

To ensure proper QR code use and a successful campaign, be sure to adhere to general best practices and use a platform that will help ensure you do so and more.