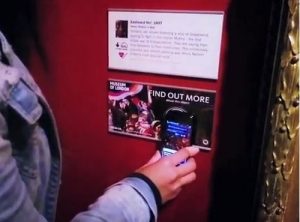 The many uses of NFC at a place like the Museum of London (MoL) are almost endless.  For just one example, the MoL has made many of their exhibits interactive by including NFC tags in the actual exhibit, so the visitor simply taps their phone to the tag and is taken to videos, audio, games, or other information about whatever it is they are viewing.  This helps to make the visitors experience far more interesting and enjoyable, and hopefully leading to more visits in the future.

Besides this more obvious use of NFC mentioned above, the MoL is even more ahead of the game in some of the other ways they have used NFC.  For example, they have placed NFC tags around the museum that allow visitors to instantly ‘follow’, ‘like’, or ‘check-in’ to the MoL on social media sites like Facebook, Twitter and Foursquare simply by taping their phone to the tag.  This is a fantastic way to create inexpensive high quality advertising for the Museum. 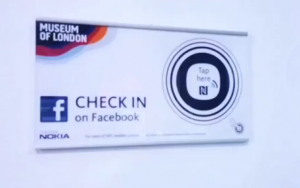 Other ways the museum has used NFC is to give vouchers and coupons to customers if they simply tap certain tags.  These vouchers and coupons can be used in the MoL’s gift shops or cafes.  They also have tags that upon accessing can let you download the Soundtrack of London which is an App that takes you on a musical tour of London while you walk around the city.  Or you can use the NFC tags to donate to the Museum and purchase a ‘Year of London’s history Timeline’.  This puts your name and caption on the year you adopted on their large timeline that runs through the museum.

So as you can see the Museum of London has really gone all out in their use of NFC and they did so before it was a well known technology.  These creative ways that they used NFC should be a great example for other museums and similar organizations to begin adopting.  Creating more ways for customers to interact with your brand, information, or providing them with some added value or special deal, is a great investment for your business or organization and ignoring this, particularly now that more and more companies are already on board with NFC, is likely to stifle your future growth.

If you are going to begin using NFC technology just make sure that you have a platform that will help you manage your many tags in one place, track the usage data and ensure you are complying with best practices.