In the produce aisle of the local supermarket, most shoppers just see fruits and vegetables. 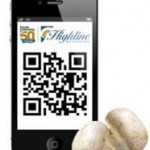 Not the marketing team at Highline Mushrooms.

To Highline, the largest mushroom producer in North America, the produce section is a battleground for customers—and a highly competitive one. After all, most mushrooms look pretty much alike.

To win this “produce section battle,” Highline recently took a new approach. They started by looking at their packaging, and asking a few critical questions: What if that tiny label could show that the mushrooms inside came from a 50-year-old family farm totally committed to pesticide-free growing? And what if it could offer a customer something that led them to think beyond their shopping list and toss a box into their cart?

Regulations prevented the Highline team from doing much to augment their packaging graphically. But then they thought of a better idea: connecting in-store shoppers with the Highline brand through their smartphones. The team envisioned QR codes on every package that linked to an intuitive mobile site, influencing shoppers as they made their final decisions on what to buy.

“It’s hard to get people to change their routine, especially when it comes to what and how they cook” notes Jane Rhyno, Director of Sales and Marketing for Highline. “That’s why reaching them right at the point of sale is huge.”

Highline focused their mobile experience on recipes. They sought to provide shoppers new ideas for things to try, complete with beautiful photography and user comments, all right there in the store. Naturally, the recipes would feature Highline Mushrooms.

“The recipes show how much you can do with mushrooms, and the mobile site gives them an evocative, interactive experience right while they stand in the store,” Rhyno notes.

Choosing a partner to ensure success

Their vision in place, Highline turned its attention to finding a provider who could work within its budget and deliver both the QR technology and a high-performing mobile site.

“We wanted to get up and running right away with this idea, but we didn’t have the staff or the resources for a big undertaking,” Rhyno notes. “What really sold us on Qfuse was the simplicity of it all, and the fact they provided the QR implementation, the site design, and the analytics.”

The move paid off. Just three months since launching the recipe campaign, shoppers have scanned Highline’s most popular mushroom, the Whole White, more than 2,250 times and begun to actively engage with the featured recipes. The results to date strengthen Highline’s commitment to the connected media approach.

“You have to think long-term with this type of thing,” she notes. “Many people are just starting to ‘get’ QR codes. We see it as the most cost-effective way to reach customers at the point of sale now, and as something that will only continue to grow as our customers get more familiar with the technology.”

About The Author: Sean Dempsey

Sean is one of the founding members of Qfuse. He enjoys technology and using it to solve marketing and business challenges. Sean works directly with the development team to manage the implementation of new features and functionality, while also overseeing day-to-day operations and business planning.