How Not to Use QR Codes: Part 5

QR codes are a fantastic tool for almost any business or organization to use, whether you are a one man band or a large corporation, QR codes can help to improve your advertising and marketing effort, and even help boost sales.  There are, in fact, few ways you can’t, or shouldn’t use QR codes; and yet people always seem to find these ways to use them and somehow come to the conclusion that it is worth wasting resources on.

The problem with this isn’t just that the poor QR code use is a waste of time and resources for the individual or organization that uses it, but it’s even more than that.  When people continue to use QR codes in bad ways, or don’t abide by general best practices, they make the QR code tool in general look bad and it creates a certain stigma for the technology, hurting the QR codes users and preventing consumers from scanning codes in the future. 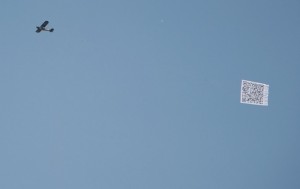 Here is a perfect example of how NOT to use QR codes.  In the photo right, you will notice a plane towing a large QR code.  At first you might think that this is a creative use of QR codes, and perhaps it is creative, but it is also incredibly dumb.  Even creative QR codes need to have a one main ingredient or they are completely useless, and that one thing is scanability.

There are really three main problems with this QR code usage.

2)      Even if this code was MUCH larger and being pulled by a Boeing-747, it still likely would be tough to scan.  A code needs to be clear to read, but clarity becomes a problem when the code is moving as it creates distortions and the scanner cannot read it.  Having a code pulled by a plane is certain to cause the code to move in the wind and become unscannable even with the proper size.

3)      The last issue with this code, and probably the biggest issue, is that someone decided to spend probably a hefty penny to hire a pilot and to have this large QR code banner created.  For a fraction of the cost they could have put together a much more useful QR code campaign using more traditional media and seen a much great bang for their buck.

Before you decide to spend resources and time launching your QR campaign, please make sure you have thought it through and aren’t going to find your QR code highlighted on a blog like this.  Follow our best practices, use a platform that will help ensure you do everything right, and don’t mess up your QR code usage as it makes all of the users look bad.