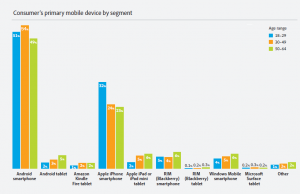 Deciding where to put your time and marketing resources is of vital importance to ensuring you get the most out of every dollar invested.  In order to achieve this efficient campaign you must have all the relevant information and data and to glean from it what you can.  One of the many important pieces of information that can help in this regard is which particular operating system is the most popular and what type of people use each one.  Results from the Adobe 2013 Mobile Consumer Survey can help illuminate this information for us.

Android is Beating Apple in Terms of User Adoption

Since last year the Android operating system (OS) has gained popularity in every age group surveyed, and currently 55% of all US citizens surveyed use Android as their primary OS (55% of all Europeans surveyed prefer Android phones to iPhones as well).  This places Android as the largest OS, and by a significant amount.  Android continues to grow and therefore it would seem to be the focus of any mobile marketing strategy.

The growth and larger market share of Android however, is not the entire story.  The iOS is indeed the smaller used OS with just 31% of people claiming it as their primary mobile device (with a larger percentage of younger people using it), but this smaller and somewhat decreasing market share does not mean it should be ignored.

In fact what the Adobe Survey has revealed is that the iOS is the “operating system of choice for browsing.”  Not only this but iOS users utilize apps and websites at a much higher rate, and are almost always connected in some way through either their smartphone or tablet (of which 4 of 5 iPhone users also own).  iOS users use apps more frequently and “use nearly every possible type of app.”

What this means is that iOS has a smaller market share, but the people who do use iOS are incredibly loyal and make far more use of the technology.  Since they spend more time on apps and mobile sites and also use a far greater number and diversity of apps, this makes them a much better target consumer for your dollars and should lead to a greater return on every dollar spent.

You can reach out to both Android and iOS users by linking QR codes your your apps or QR code connected mobile landing pages.