It is often the case that QR code campaigns will completely ignore the generally agreed upon best practices for QR code use.  For example, many QR code fails might not use a mobile optimized landing page, or they might use a high density code making scanning difficult, or perhaps they don’t have a call to action to explain to the benefit consumers will get by scanning their QR code.  All of these things are going to decrease the productivity of said QR code campaign by hindering the number of scans received.

Don’t Cover Up Your QR Code

It is possible, however, to do even worse than these common fails.  Instead, you might do what CNN did below, and make it physically impossible to scan your QR code, thus not just causing some slight hindrances, but physically preventing anyone from scanning the code. 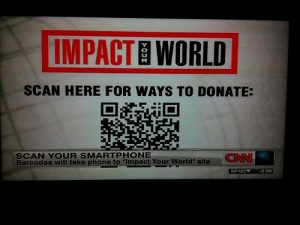 It is really too bad what CNN did here.  They had the right idea.  If you are going to use a QR code on TV you need to make sure it’s large enough, and people know what to do with it and what they will get out of it.  But more importantly: MAKE SURE IT CAN BE SCANNED!!

If you are going to put time, energy, and resources into using a QR code and putting it in your programming, please makes sure you don’t put a graphic over the actual QR code!  It defeats the purpose.

That being said, this really had a lot of potential as an easy way to get people to donate to their cause.  Too often I see QR code campaigns with so much potential get ruined because someone didn’t think everything through.  This has a great cause, a good call to action, the code wasn’t too dense, the code was highlighted as the main purpose of the ad, and it was left on the screen long enough to scan.  But someone in the graphics department just didn’t fully think about what they were doing and the entire campaign was made completely useless.

Please think before you code and make sure you do QR codes right.  You will do all of us a great favor.