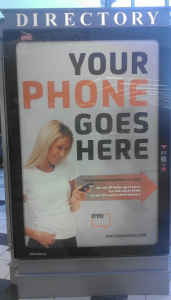 My friend was walking through the mall the other day when he stumbled upon this large advertisement (right) near the mall entrance.  It peaked his interest so he scanned the code and took some pictures.

The advertisement was done by Eye Corp Media (eyecorpmedia.com), one of the largest international out of home advertising networks, and was set right at the main entrance so that it is visible to everyone coming in and out of the mall.

The advertisement is interesting because it really doesn’t advertise anything, instead all it is attempting to achieve is for customers to take out their phones and engage with the advert.  So despite not actually advertising anything what they have created is a fully interactive kiosk that has been made so by implementing QR codes and NFC tags, and really what they are selling here is the actual interaction.

Making advertisements and marketing materials engaging and interactive in this way can go a long way to improving the quality, substance and effectiveness of similar types of media. 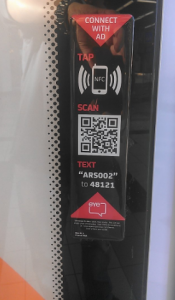 Now the thing my friend also noticed upon scanning is that the content wasn’t spectacular.  Though the content did vary depending on your sex and age—which is a cool feature—it did not offer anything terribly interesting.  What you received was either a joke (a quite lame one at that), or some random fact.  So nothing that would keep a customer’s attention for more than a few seconds.

I suspect though that this was being done more as a test run, since after you received your joke or fact you were asked what would you have rather seen, and are given a list of different types of content  For example, videos or special offers in the mall.  In this way Eye Corp Media is probably able to use the example advertisement as a way to generate beneficial market data that could be used for future adverts.

All in all this was a very good example of the potential for making things like mall kiosks interactive, and more useful using technologies like QR codes and NFC.  Just make sure if you attempt to do the same sort of thing you are using a QR code/NFC platform that will help ensure a successful campaign by giving you every tool you could possible need.