How Improve Your Physical Advertisement with QR Codes 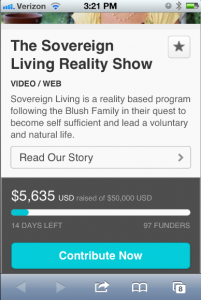 I stumbled upon a poster for a new TV show titled Sovereign Living put on by sovereignliving.tv, a small upstart TV channel just trying to get their feet off the ground.  The show appeals to a small niche in the market, mostly some of the more unknown breeds of libertarians, though unknown only to those not in such circles.  The show follows a young family as they begin to live a “natural” life of self sufficiency, community, and volunteership  as a way to fight back against the system, as opposed to fighting back politically as they have in the past.

What I noticed right away from their poster, and perhaps not surprisingly since it is a libertarian channel, is the three large QR codes that are the focus of the poster.  Clearly the creator has a goal with this poster, and scanning the QR codes is that goal.

Since this is a new channel, and they apparently only had the resources to make episodes 1-3, they are now looking to raise new monies in order to support the channel and to complete episodes 4-6, in addition to marketing and administrative costs.

In order to help drive these donations they made the focus of their poster a way to easily allow people to give.  They did this through using the QR codes.

There are three QR codes on the poster, one of which directs the consumer to the first episode of the reality show, letting newcomers to the show see what it is all about, and hopefully gaining their interest.  This alone is a great way to use the QR code.  It provides the consumer with the product at the moment they see the poster, when their interest will likely be highest.

The other two codes on the poster let you donate to the cause.  The reason for two QR codes is that they take traditional donations using FRN’s (Federal Reserve Notes), as well as the more modern type of donation using Bitcoins (of course a libertarian channel would take Bitcoins, how could they not?).  This also lets people make donations at the moment their interest is highest.

Each QR code is labeled with the site you are directed to, and below the codes is a paragraph explaining what your donation will be going to support.  A great way to drive donations.

For anyone using posters or any other print advertising, you should learn from this.  Including a QR code on said material and connecting it to relevant information and/or connecting to a portal to make purchases or donations or whatever, is going to drastically increase the productivity of your physical advertising.  But ONLY if it is done right and the connected media is appropriate for what the consumer might want or is looking for at that moment they see your advertisement.

If a low budget TV channel like sovereignliving.TV can be ahead of the curve and use QR code (properly) than there is no excuse for any other company or group out there today.  Just make sure you are using a platform that will help to ensure you are doing everything correctly.