Charity Uses QR Codes to Help Their Cause 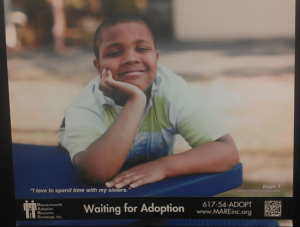 A friend was at the Jordan’s Furniture in Avon, MA this past weekend and saw numerous poster advertisements for a charity called MARE (Massachusetts Adoption Resource Exchange, Inc.) which helps to find families for children in foster care.

The posters grabbed his eye and he noticed that they had a QR code on each poster under each child; this piqued his interest so he scanned the QR code.

The code took him to MARE’s desktop website.  Not ideal.  In this sense it isn’t necessarily a great QR code to highlight, but it’s not about how the QR code was used here, instead I want to point out how the QR code could have been used to really improve the advertisement and help generate even more interest for this great cause.

The posters highlighted different children looking for parents and a QR code was included on each child’s poster.  But instead of the QR code directing the viewer to the MARE desktop site, a better possibility would have been directing the viewer to a mobile optimized site with a video of the child, or a biography and pictures.  This could be done for each child to really personalize the advertisement and help prospective parents get to know the child right then.  Perhaps seeing the child interviewed, or hearing about their back-ground might make a potential parent act sooner rather than later, or not at all.

Obviously this isn’t to pick on the MARE advertisements; I just thought it a good example of how QR codes have a lot of potential that often isn’t being tapped.  QR codes are a great way to connect offline media with online media, but it works best when that online media has interesting and engaging content, thus making it worthwhile to connect in the first place.