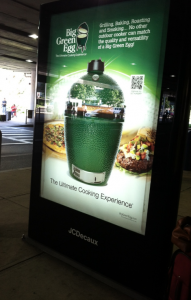 There have been some large improvements in physical advertising recently, for example physical displays, or kiosks that you might see at a shopping mall or gas station.  These kiosks would formerly only have been able to place a single poster or other physical advertisement in their display, but now with the introduction of digital displays they can rotate multiple ads in the same physical space.  And in addition to this, often times the displays can integrate video or rich media as well, greatly increasing the effectiveness of the advertisement.

Despite these improvements however, they remain generally static and passive, meaning their effectiveness is still lacking.  In order to achieve such a physical advertisement’s potential a QR code can be added directly into the digital media.

The addition of a QR code, if properly applied, means the potential target audience can now engage with the brand, and be alerted or connected to any related content or promotions at the moment the advertisement is most likely to have piqued their interest.  Not only this, but they can now take the brand/promotion with them on their smart phone and continue the interaction (perhaps through an app) or ensure a later purchase.

For example, say there was a digital display on a kiosk in a mall, and the display included a QR code.  Next to the QR code in large writing a call-to-action might clearly tell potential customers that if they scan the code they will receive a coupon that is usable only for that day.  The customer can then scan the code and take the coupon with them to said store in the mall and make a purchase that they otherwise might not have made.

If this particular code is a dynamic code then new coupons/specials can be offered every day and the QR code can be changed to meet whatever the needs are of a specific day.  Perhaps a store has an abundance of inventory for jeans, the QR code coupon could be changed to offer a buy one get one, or a special discount for those scanning the code on that specific product etc.

Adding QR codes and using them in this sort of way to capture customers attention and provide them with incentives to make additional purchases is the best way to make a physical advertisement live up to its potential and drastically increase its value.  Don’t lose out on this sort of additional value your ads could be providing, use QR codes.  But also use them well.