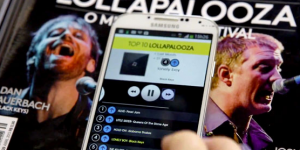 NFC technology has fantastic potential for an incredible number of industries and organizations, even despite the low usage in the United States.  This low usage is sure to change as NFC slowly begins to find its place in the general market and companies begin to use it in their marketing and advertising campaigns.

The rest of the world however appears to be ahead of the fifty States, whether it be in India, or now even Brazil, where we see a perfect recent example of how awesome, and how useful NFC can be to help engage the consumer, and help drive sales.

This example of NFC being used in Brazil was orchestrated by the Billboard Magazine in an issue a couple months back.  What the magazine did was insert an NFC chip into the pages where particular bands or songs were mentioned.  Then if you desired to listen to the band or particular track the consumer could simply place their phone near the page and they would automatically be directed to a webpage where the song can then be played for free.

This exciting use of NFC helps make the written word come alive.  Now as an article talks about some new band you can hear the music right at that same moment.  And if you like the song you simply click to buy it on iTunes.

NFC uses like this one can certainly help re-vitalize print media and help fuse offline and online media in ways never thought possible even a few years before.  This genius use by Billboard Magazine in Brazil is only the tip of the iceberg of where NFC can go in the coming years.  But as people begin to experience these great uses there will be no slowing it down, even in the many United States of America.

If you do plan on using NFC technology in any of your marketing or advertising campaigns, just make sure you follow general best practices and are using a platform that can ensure a successful campaign and help increase you campaign’s efficiency.

For more on this example of great NFC use, see the video below. 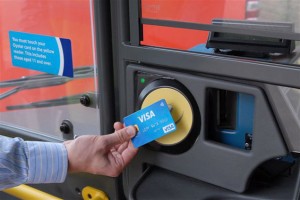 In December of 2012 the Transport for London began installing NFC compatible readers into their 8,500 buses.  The purpose of doing so was to make the customer’s experience better and decrease the number of cash transactions (cash transactions are costlier than other transactions).

This adoption of NFC technology allows any customer who has an NFC enabled card (most are compatible already) to simply swipe their credit or debit card over the sensor and pay the fare.  The alternative is digging around for change or purchasing a separate bus pass.   Not nearly as convenient.

As of April 2013 TfL reports that they have now surpassed 1 million NFC scans, from over 10,000 commuters, and the number of NFC users are growing by 1,000 every week.  These NFC payments account for 20% of all bus payments.  And to date, every single bus of the 8,500 bus fleet has recorded at least one scan though with certain bus routes getting much greater NFC usage than others. 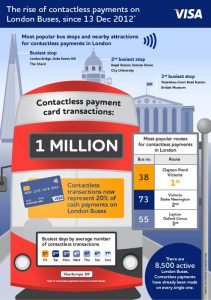 This is a perfect example of how the NFC technology can be of great practical use.  It allows for a much more efficient payment method, ensuring quicker payments, safer payments, and more convenience to the customer and the business.

This type of usage works well for large companies with millions of transactions, but it is certainly not limited to such companies.  Even small companies could benefit from this technology by providing easier payment transactions for customers, whether in a retail store, park, or any other business setting that accepts payments.

With the success of this NFC usage in London, you can likely expect other cities to begin copying this use, and it’s about time.

For help with your NC campaign be sure to check out the Qfuse platform and see how it can make you life much more efficient. 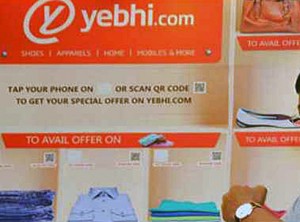 I have written in the past about using QR codes as a way to set up virtual stores where customers can simply scan the codes on each item graphic and make a purchase with their smartphone, but I have not discussed this same possibility with NFC.

In the same way QR codes can be used to allow a virtual store to be placed anywhere—a train station, a street corner, etc.—NFC can also be built into the same graphics and used as a way to make purchases as an alternative to QR codes or simply in addition to QR codes.

This trend towards QR codes and NFC for such purposes is only speeding up, even abroad in countries you might not suspect.  In fact in India a company called Yebhi.com is using NFC in this exact way.

Yehbhi is an Indian fashion and lifestyle retail company and last month they launched a NFC virtual store campaign (QR code compatible as well) throughout some 30 cafes in Delhi and Bangalore.  Each poster will have photos of particular items, and each item will have a corresponding NFC tag and QR code.  To purchase the item you simply wave your smartphone near the item or scan the QR code and the item will be shipped to wherever you desire.

This is a great way to drive online sales and allow the customers to physically interact with a brand.  It allows customers to literally make an impulse purchase upon seeing an item they might like, and do so with incredible convenience.

Obviously these sort of virtual stores work best in areas of high traffic, but not hectic traffic.  They are best where people are mulling about or waiting for something like a train or bus.  But the potential of such a use of the NFC tag (or QR code) is impressive, and this should certainly be considered by any retail store looking to drive online sales through mobile websites.

If you are looking for a all-in-one mobile marketing solution to help you run your NFC or QR code campaign look no further than Qfuse.  Your life will be made easier by giving it a try. 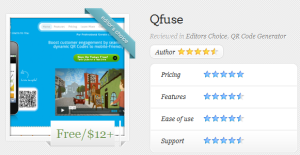 Mark includes a five star rating system with his reviews to make the potential consumer’s choice easier in deciding what product or tool is best for them.  The topics he rates include, Pricing , Features, Ease of Use, and Support.  The “Pricing” category is pretty self explanatory, if it is inexpensive it gets a high rating.  The “Features” category is based on what the platform offers its customers, for example, does it simply offer a QR code generator or does it offer a QR code generator plus a mobile web site creation platform and other relevant features.  The “Ease of Use” factor is based off whether a technically challenged individual could easily use the product or not.  Lastly, the “support” rating is based on whether the consumer support staff is accessible through online, phone, and whether there are tutorials or webinars available to answer most questions.  Taken together the author then offers an overall score.

So what ratings were given to Qfuse?  Mark’s Marketing Toolbox gave Qfuse his ‘Editor’s Choice’ in the QR Code Generator Category, and gave an overall scores of 4.5/5 stars.  Pricing received 5/5, Features 4.5/5, Ease of Use 4.5/5, and Support 4.5/5.  Qfuse also appears in his “Top Rated Products” category.

To see his full review and rating of Qfuse, click here.

Many of today’s QR Code generators are unable to track critical data about who is scanning your codes, when they are scanned, and where they are scanned.  Without this tracking you can only hope that your QR Codes and/or NFC Tags are being used by consumers and that you have successfully implemented your QR Code marketing campaign.  However, with our state-of-the-art Qfuse QR Code Analytics system you can see this data visually and dissect it to make better informed marketing and business decisions in real-time.

With each QR Code or NFC Tag marketing campaign implemented within Qfuse you can track individual statistics as well as overall campaign success.  In fact, with Qfuse you can use unique codes and link them to the same mobile landing page to track individual codes separately.  This is helpful if you use QR Codes on various types of physical advertisements (e.g. posters, product packaging, and/or in-store displays) and wish to determine which ads are getting receiving greater traffic and from which location.  From this information you can more efficiently decide where to place future ads, invest advertising resources, or make changes to current ad campaigns.

Qfuse QR Code and NFC Analytics also tracks month-to-month statistics, allowing you the ability to view scan changes (“deltas”) over time and compare to past performance.  It even allows you to track QR Code scans at the country/state/city levels.  You can view the specific region clusters, down counts of the individual scans.   From here you can view what type of phone the individual was using, what day they scanned the code, and at what exact time of day they scanned it.

The Power of Qfuse QR Code and NFC Analytics

The Qfuse Analytics Platform is like no other QR Code and NFC Tag reporting service! In addition to presenting intricate scan data, it also displays Mobile Site Analytics; this displays a comprehensive breakdown of which pages on your mobile site(s) were visited most and also on which ‘elements’ users specifically clicked, e.g. a click-to-call button or a link to Facebook, etc.

Without data, it is extremely difficult to make educated decisions; instead, all you can do is hope.  With Qfuse you are empowered to make better business decisions – easily determine where to  invest marketing and sales resources to impact the bottom line.  You can also determine the most efficient ways to use QR Codes and NFC Tags for a city, state, national, or even global QR Code and NFC campaigns.  Now you’ll be able to gain new customers, better increase brand interest, and drive more sales.  Without Qfuse Analytics you are running blind, something that’s easily avoided.