Quite often when we discuss how to run a successful QR campaign, or when we analyze examples of QR code uses, we end up discussing the large issues in QR code use like where the code is located, call’s to action, and mobile optimization.  There are, however, other smaller and less obvious best practices for QR code use that are often not discussed but can be vitally important, or greatly advantageous, to a successful campaign.  Below are four key concepts.

What I mean by this is how busy the QR code looks.  The denser the code the harder it is to scan, and the less successful your QR code will be.  A high QR code density is caused by too much data.  The remedy for such an issue is link shortening.  This can be done by using tools like bit.ly, goo.gl, or our own Qfuse.it (built into our QR code platform).  What good is a QR code if it is impossible to scan or incredibly difficult?  Ensuring a low density QR code it vitally important to a successful campaign so be sure to use a link shortening tool.

Quite often you might be in the middle of your QR code campaign and realize that you would prefer the QR code link to a different landing page.  Most codes, however, are permanently attached to the link you imbedded at the time of printing.   This decreases your flexibility and means you cannot make all the changes you may want after going live.  To remedy this, make sure you find a site that has ‘dynamic codes’, that is, codes that allow you to change the imbedded link even after publication.

Of course having analytics for your QR code campaign is an obvious QR code must-do, but quite often you can only find providers that will give you the analytics for the entire QR code campaign and not provide analytics for each individual code.  The problem with this is that you are then unable to find out which codes are working and which are not.  With individual analytics you could then determine that your advertisements in one location was working great while in another location the same advertisement was not working at all, and changes could be made after the codes were analyzed to determine why one worked and the other didn’t.  Or perhaps you made two similar advertisements, but made minor changes to each and wanted to see which performed best, with individual analytics you could find out, with general analytics only you would never know.  Most providers will either produce no analytics or only general analytics; make sure you find a platform that provides, or makes it possible for you to receive both general and individual analytics. 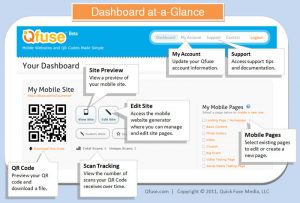 For the non-programmers or designers out there, what happens if you begin your QR code campaign, create your mobile landing page (or more likely, had someone else create it for you), and then go live with your campaign but shortly after realize that you need to make some change to your mobile site?  Well assuming you don’t have your original site designer at your every beck and call, you will likely have to wait to make even a simple change.  If this applies to you a simple remedy is make sure you are using a QR code site that also attaches easily creatable and easily changeable mobile sites to each code so that you can make changes to your landing pages with ease and whenever you want.  No more waiting for a professional to make the changes for you, or having to take down the site for a period of time.

If there are any other QR code best practices you think are often overlooked, please mention them in the comments below.